TLDR: We make a model valuing draft picks according to how much they outperform their rookie contract (using historical data from 1994-2016). Draft picks tend to be underpaid on the whole (as expected), serving as cheap talent (whereas free agents are ‘properly priced talent’). The most underpaid draft picks are in the late first round and early second round; counterintuitively, this suggests they could actually be worth more than high first round picks.

Originally published on the Brown Sports Analytics blog. Amended below for clarity / brevity.

In March 2017, the Cleveland Browns acquired the maligned Brock Osweiler from the Texans. Osweiler was coming off a disappointing season, and had just signed a massive 4 year, \$72 million dollar contract the year before.

Osweiler was released from the Browns less than six months later, never having played a snap. For his ‘contributions’, the Browns paid \$15.225 million dollars, the remaining guaranteed money on Osweiler’s contract.

What this boils down to is a draft pick valuation problem. From an asset perspective, the Browns traded \$15.225 million in cap space for a second round pick (minus some change). So, put yourself in the shoes of the Browns braintrust. How would you know if \$15.225 million was a fair price to pay?

In this blog post I will explore a model for valuing NFL draft picks in terms of cap space - and thus implicitly render judgment on the Browns (more on that later). Building a sensible model requires first understanding what we’re modeling - so let’s start there.

Fortunately for us, valuing NFL draft picks becomes a resource management problem - as opposed to a free market-type problem. Vague terminology aside, what I mean is:

In this optimization problem, we control for just three asset classes: cash, players, and draft capital. Each team is given a set amount of cash (salary cap), and a set number of draft picks each year to begin with. The team must maximize the usage - and accumulation - of these three forms of capital. The hope is that each exchange (money for player, draft pick for player, money for draft pick, etc.) increases the overall value of the assets under the team’s control. If I sign a player “worth” \$8 million for \$4 million, I’ve just increased my ‘asset pile’ by \$4 million. Note this model holds in practice - the 2013 Super Bowl Champion Seahawks paid (in cap space) just over \$18 million for the services of Richard Sherman, Kam Chancellor, Earl Thomas, K.J. Wright, Bobby Wagner, Michael Bennett, Cliff Avril, and Russell Wilson. In an open market, these 8 players would have raked in easily over \$90 million combined per year.

We will use this optimization, ‘asset-pile-building’ framework to develop a model for valuing draft picks.

The intuition of our draft pick valuation model is as follows:

This is a good segue into a key assumption our model makes.

Data in this project was scraped using Python’s Beautiful Soup Library as follows:

To start, we needed to develop a metric for the ‘fair salary’ for a player - this is defined as the ‘maximum’ salary that a team should be willing to pay for a player in a non edge-case situation (i.e. for instance, one edge case is when a team is far below the minimum spending threshold, and then ‘overspending’ is preferable to having unspent money go wasted).

The premise behind our fair salary metric is that the salary ratio between Player A and Player B should be equal to their contribution ratio. We use Approximate Value (AV) as a proxy for talent and contribution level; Approximate Value is a metric developed by Pro Football Reference designed to measure contribution, and is comparable across positions. It is measured on a yearly basis and is useful as an objective, comparable metric for how much a player contributed to their team in a given year. Read more here.

In making our fair salary metric, we make the following assumptions:

Using these three assumptions, we calculate the fair salary for any given player in any given year, using the following formula:

Then Fair Salary is: $$\dfrac{P}{AVTotal}\cdot SC$$Some of our findings included:

These findings are interesting, but undervalue backups - i.e. some backups have 0 AV but are worth over $0 (i.e. backup quarterbacks).

Next, for each pick number, we took all the players taken with that pick number from 1994 to 2016, and averaged the annual AV per year over the first four years of those players’ careers (length of rookie contract, fifth year option for first rounders not withstanding). 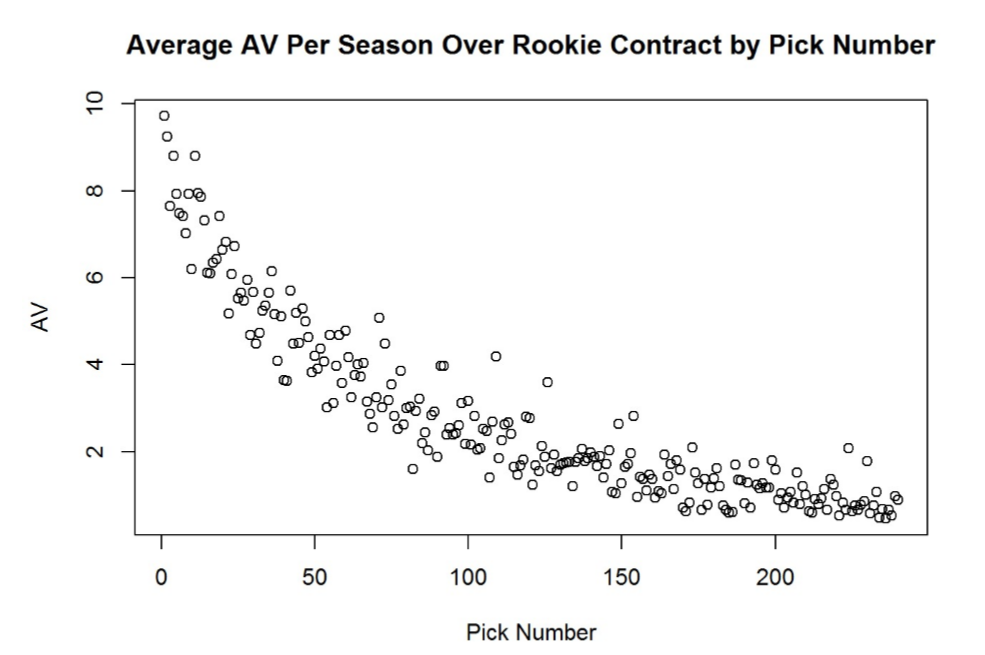 We now have a function representing the expected AV contributions for each pick number, which we want to convert to fair salary. Let’s calculate the fair salary for draft picks in the 2017 NFL Draft. We make the following assumptions:

Assumptions #1 and #3 will almost certainly not be true. For assumption #1, knowing that the salary cap will likely increase, we can circle back later and note that our fair salary assumptions are probably conservative. For assumption #3, this value stays relatively constant over the years, so we are fairly confident any differences will be marginal. Our results come out… 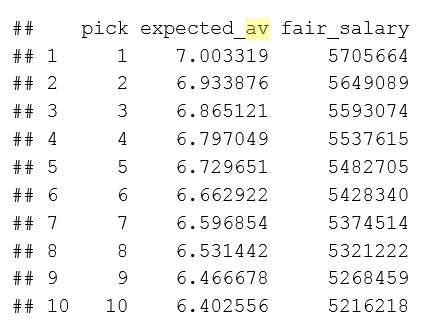 Finally, the part we’ve been waiting for! Comparing fair salary to actual salary, we get the following results, where: 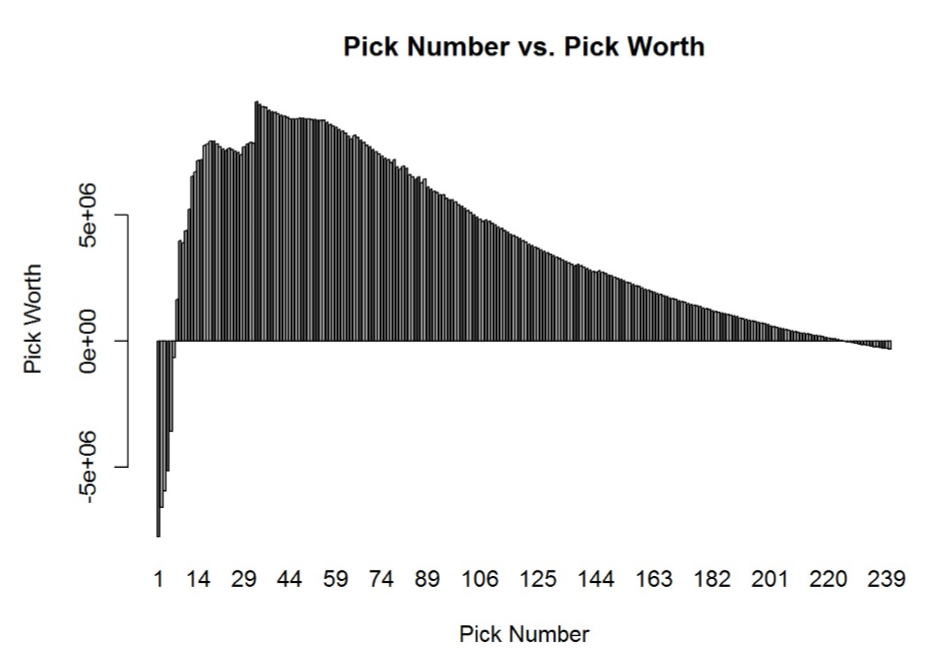 This means the Browns in essence removed \$15 million from their asset mountain, and only received \$8 million in return.

So, does that mean the Browns made a bad trade? Not necessarily – one explanation is that the Browns wanted to give up present value for future value. In addition, there are intangible considerations - perhaps the Browns wanted more youth in the locker room.

These are impactful and meaningful insights, and provide promise for future work. However, we note the following limitations (which we could also address in future work):

A final caveat to note is that these draft pick valuations are only valid for future, unknown draft picks. During the actual draft, these picks should be instead valued based the players available at each selection (which, of course, is not known until usually a few picks before).