What is the best way to measure how close a game is?

So the obvious answer is, check the score. But the score is not necessarily indicative of how close a game is. If a team jumps out to a 31-0 halftime lead, and proceeds to win 31-24, this game was never close, even though the final margin was just 7 points. See Panthers Seahawks 2015 playoffs.

In contrast, if in the middle of the third quarter the score is 24-21, and the team with 21 ends up winning 48-27, the game was a lot closer than the final score indicates (garbage time touchdowns). See Patriots Cowboys 2007 regular season.

So, perhaps there’s a better way to measure game closeness than point differential.

I sought to create a better metric for evaluating how ‘close’ a game is. I’ve called my metric “integrated point differential,” or ‘ipd’ for short. To calculate ipd for a given team in a given game, we take the integral of the team’s point differential throughout the game with respect to time, where point differential is defined by ([team score] - [opponent score]).

It’s simpler than it may sound. To get an idea of the intuition behind the metric, consider the following game between the Patriots and Dolphins.

Here is the plot for the point differential throughout the game. 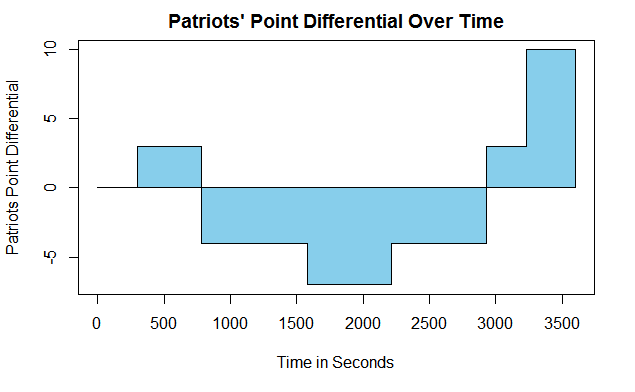 The point differential starts at 0 when the game begins (the score is 0 to 0). It jumps to three when the Patriots score at 300 seconds in, and drops to -4 when the Dolphins score a touchdown to lead 7-3. We continue this process for the whole game.

Note the final score of the game is the same. Here is the point differential plot. 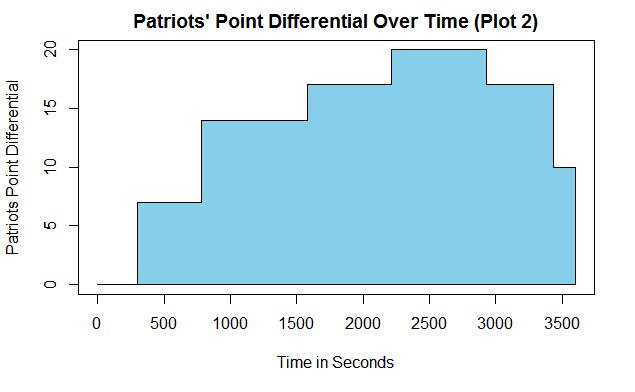 Another interesting approach we can take is adapting this metric to NFL spreads. If you’re not familiar with betting terminology, check out my basic guide.

Just as the final score is not necessarily indicative of how close a game was, it is also not necessarily indicative of how good a bet was. In other words, even if a team covers, they may have gotten lucky or it might have been a close call. As a gambler, we aren’t interested in games where the outcome could go either way; we are more interested in determining games where the spread may be set completely inaccurately, making the winning side a ‘safe bet.’

For instance, let’s take the (first) game from the IPD section where the Patriots won 20-10. Suppose the spread in that game was Patriots -3. Then our graph would look like: 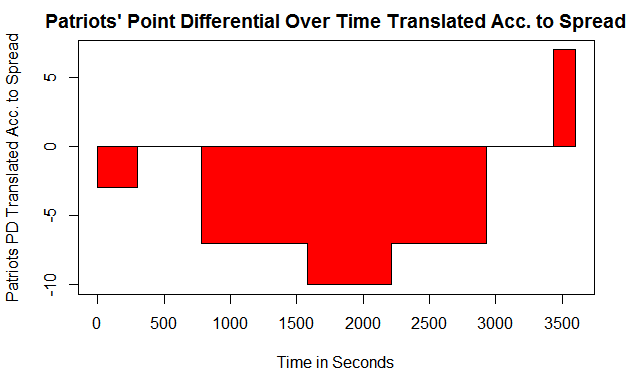 Using Python’s BeautifulSoup Module, I scraped box score data from Pro-Football-Reference and calculated the IPD and SIPD for every game from 2002 to 2016.

The most interesting game here is the Colts’ blowout of the Ravens, where the Colts won by “just” 24 points. The game would rank 146th in terms of ‘road blowout’ by point differential alone (i.e. between 2002 and 2016, there were 145 games in which the road team won by 25 or more), but ranks 4th in IPD rankings. Here, IPD captures how the Colts led 30-0 with 11:57 left to go in the second quarter, and 44-7 until the Ravens tacked on two garbage time touchdowns in the 4th quarter - box score for reference. In this sense, IPD better captures how badly the Colts destroyed the Ravens than point differential alone.

Meanwhile, the biggest road blowout in terms of point differential was Patriots @ Bills in Week 10, 2007, when the Patriots won 56-10. This game ranked 7th in IPD.

Nothing surprising here - the only ‘anomaly’ is the Falcons Bucs game, which ranked 17th on point differential alone (i.e. there were 16 games between 2002 and 2016 in which the home team won by 43 or more). However, IPD captures how the Falcons led 56-0 until 8:46 in the 4th, when the Buccaneers tossed two garbage time touchdowns.

Things get more interesting when we look at SIPD - the games with highest absolute (i.e. apply absolute value) SIPD could be viewed, in hindsight, as the ‘safest’ bets - games in which the spread was wildly off, where your bet was least in doubt.

Another way we can interpret this: NFL games involve quite a bit of luck. If you cover your bet, that doesn’t mean you made the right bet - i.e. if the game was played in 10,000 alternative universes, each side might cover 5,000 times. However, obviously sportsbooks can’t set perfect spreads every time - there will be games which the spread is wildly off, where perhaps if the game was played in 10,000 alternative universes, one side might cover 8,000 times. Games with extremely high absolute SIPD are games in which we are most confident that the spreads were off.

Obviously, we don’t know the SIPD until after the game is over. However, maybe studying previous games with high absolute SIPDs can give us insight on how we can identify future games in which spreads are off.

The reason I include 11 games - and not 10 - was because I think the 11th-ranked game is interesting. Unlike the other games, the point differential was 15 points - nothing to write home about.

However, the SIPD indicates that betting on the Raiders here would have been an extremely safe bet. And the game flow verifies this: the Chargers were favored by 13, but the Raiders led 14-0 in the first quarter, 21-3 at the half, and 21-6 at the end of the third quarter. At that point, the Chargers would have needed to outscore the Raiders by at least 28 to cover. If you bet on the Raiders, your money was never in doubt.