nba: how does the rise of the 3-pointer impact offensive rebounding strategy?

Rebounding is fairly valuable in basketball, as a rebound results in additional possession (worth over 1 point). With points per possession increasing league-wide as a result of the NBA’s recent 3-point revolution, why, in fact, are offensive rebounding numbers dropping to all-time lows?

In this post we are concerned with the following strategic questions:

Unlike some other posts, this blog post won’t feature my own work extensively. Instead, I hope to summarize outside literature and combine it with some minor work of my own.

Introduction: The State of Things

The argument coaches have been presenting against offensive rebounds is that they are risky, and make you vulnerable on the defensive side - especially against these new sniper-happy Warriors / Rockets - esque teams. Many prominent NBA coaches such as Greg Popovich, Doc Rivers, and Erik Spoelstra have been on record denouncing the value of offensive rebounds.

Is an offensive rebound really worth more as teams improve their points per possession?

This, then, is simply ‘point inflation’ - it’s as if the NBA made each 2-pointer worth 4, each 3-pointer worth 6, and each free throw worth 2. The value of a possession, or an offensive rebound, does not rise.

This, then, supports the arguments posed by Popovich and co. - when playing against the Warriors and Rockets, offensive rebounds indeed have less value, since against those teams, relative offensive efficiency is low. However, perhaps the coaches might reconsider being more aggressive on the boards when against teams with poor(er) offensive efficiency.

And here are the results: 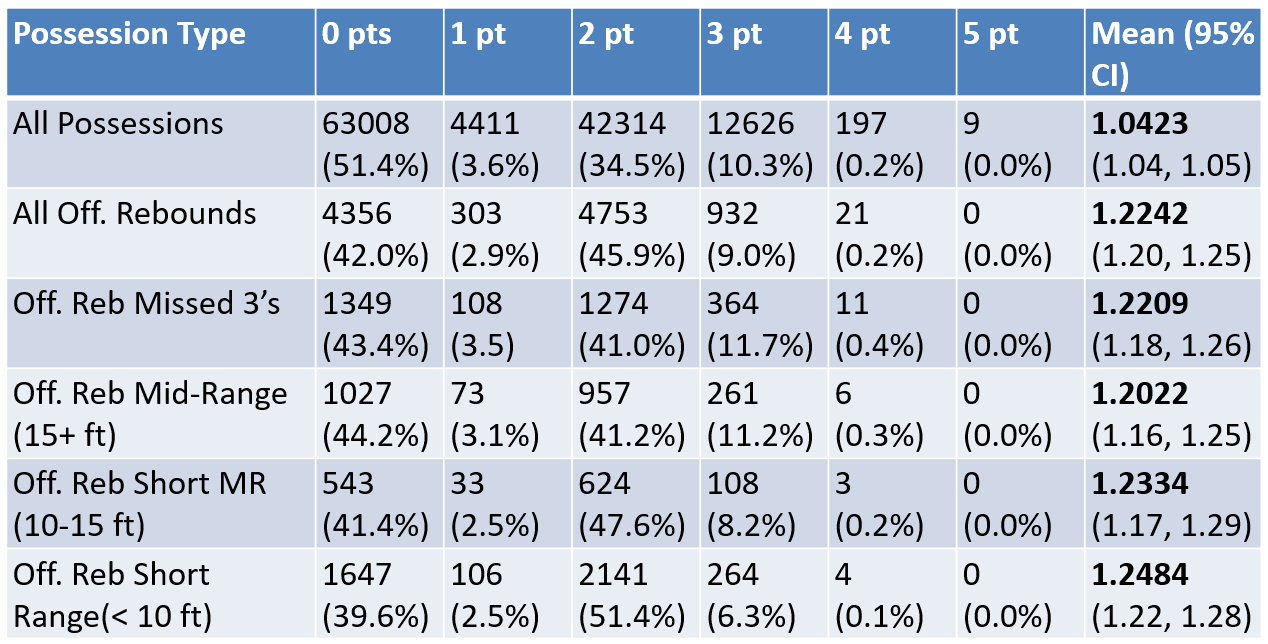 The points per possession for offensive rebound possessions also varied by missed shot location, but these differences were not statistically significant.

Crashing the Boards: A Case of Risk Aversion?

Devoting resources to offensive rebounds has an obvious tradeoff, as noted by coaches around the league: if you fail, you make yourself vulnerable on the defensive end. Luckily, this sort of thing can be modeled with classic risk / reward modeling.

In 2013 MIT Sloan Paper “To Crash or Not to Crash”, Wiens et. al measured the expected ‘value’ of the next possession depending on how many offensive players ‘crashed’ (went after) boards.

First, the study found that, yes, there is a positive correlation between sending more ‘crashers’, and offensive rebound rate. More sigificantly, the study concluded, “focusing on the offensive rebound immediately after the shot goes up seems to trump the gain a team gets with a head start on getting back” (I’m leaving out a lot of specifics - the methodology and specific results in the paper are quite compelling).

It’s plausible that teams are behaving suboptimally due to risk aversion - a common cognitive bias that’s shown up elsewhere in sports as well (i.e. in football, going for it on 4th down).

One additional point that coaches might take into consideration is energy expenditure. Suppose ‘crashing the boards’ on a missed shot increases your net point differential in the game by an expected 0.15. Is that worth the extra energy that your team expends going after the rebound?

First, any time you crash the boards, you run the risk of wasting energy if the shot goes in. Consider, then, that 3-pointers are high-efficiency, low-probability shots. It follows since 3-pointers are less likely to go in than a regular shot, crashing after a 3 point attempt is less likely to involve wasted energy.

In 2012 Sloan paper “Deconstructing the Rebound with Optical Tracking Data”, Maheswaran et. al finds missed shot attempts from close to the basket (36%) and from beyond the three-point arc (25.5%) have the highest offensive rebound rates, while missed mid-range shots (21.5%) have the lowest.

As Maheswaran et. al notes, this further increases the value of 3-pointers and close-range 2’s: they are not just efficient shots, they may also be more conducive to grabbing offensive rebounds.

In repeating this study on 2015-2016 NBA data, I was not able to entirely reproduce the same results. My results are below:

Unlike with Maheswaran’s study, missed 3-pointers did not result in an offensive rebound more often than a missed midrange shot. However, close-range shots did still have the highest offensive rebound rate. Here is a crude heat map for my data showing offensive rebounding rate by shot location. The bottom center area is the basket.

If you felt like the previous sections were only tangentially related - you are not wrong! My intention in this post wasn’t so much to present a cohesive argument as it was to highlight various ideas to consider when evaluating offensive rebound strategy. If you like modeling, or are doing a project related to sports analytics, any one of these sections could be fruitful for further exploration.

To summarize the post, there is a lot of evidence that suggests offensive rebounds should be more valuable to high-effiency teams (teams that prefer shooting 3’s and close-range 2’s):